Mediterranean Diet: is it a diet beneficial for health? 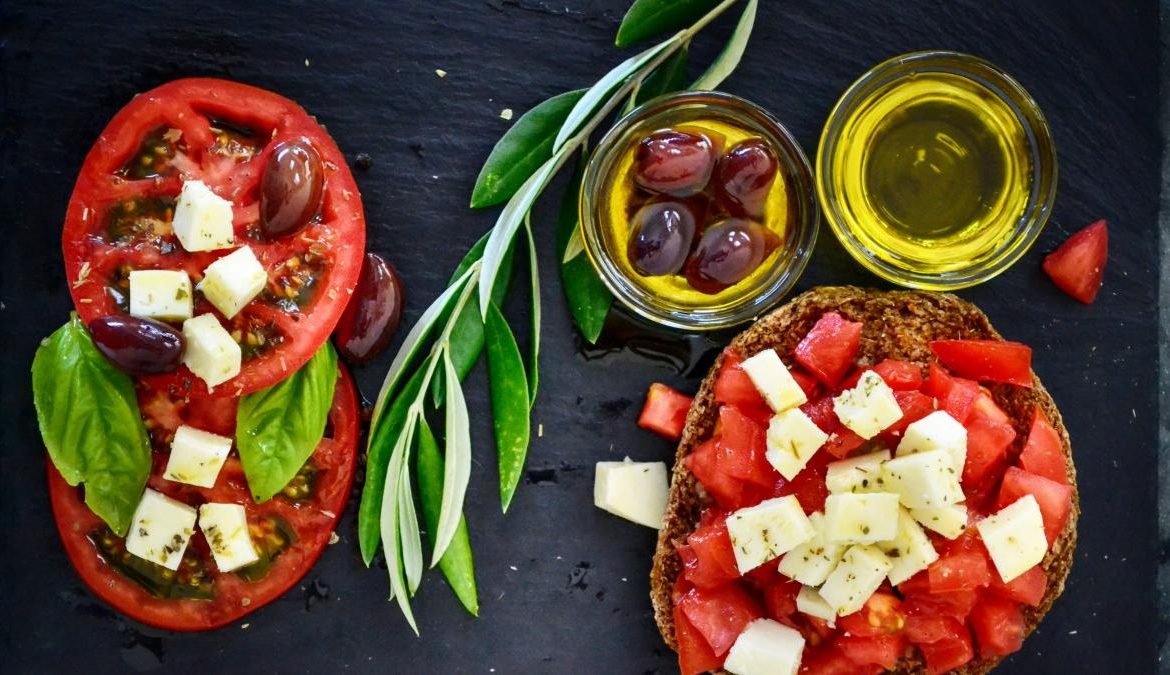 The traditional Mediterranean diet is an ideal eating pattern for the prevention of cardiovascular disease and for other health aspects. The main characteristic of this diet is the use of natural, whole foods and the avoidance of highly processed foods. Unfortunately, the westernised way of living has influenced the diet in most of the countries located in this area, changing the eating habits of the Mediterranean people.

What do we mean by Mediterranean diet?

In the literature, we use the term “Mediterranean diet” (MD), although there is not a single diet, but a combination of all the local diets from all the countries located in the Mediterranean area, which show great cultural, ethnic, religious, gastronomic and economic differences but have many common features. It is a diet that reflects the characteristic dietary habits of the Mediterranean people, based on the preparation of simple and tasty dishes made from a wide variety of fresh products and foods from 16 countries such as Greece, Italy, France, Spain, Malta, Cyprus and others. For some researchers MD is the typical diet of people living in Crete, in the decade of the 60s, while for others it is the typical dietary pattern of many regions in Greece and southern Italy in the early 1960s. Generally, it is a combination of common dietetic features, such as olive oil as the principal fat, fish and poultry rather than red meat consumption etc.

For the first time, in the early 1960s and 1970s, the Seven Countries Study showed that among Mediterranean populations there were low rates of death due to coronary heart disease, low rates of death from all causes in middle age and low rates of certain cancers. During recent years there is a general scientific acceptance that the traditional diet of the Mediterranean countries is healthier than the western diet.

A Mediterranean-style diet, which is rich in healthy fats derived mainly from olive oil and nuts, may be considered better for the heart than other generally low-fat regimens. Spanish researchers have suggested in a study published in the Annals of Internal Medicine (July 2006), that the traditional MD diet can be healthier for older adults compared to a low-fat diet in improving their cholesterol, blood pressure and blood sugar levels. Therefore, it is apparent that diets rich in healthy fats (e.g. monounsaturated or Omega-3 fatty acids), can offer a better “heart prescription” than diets which only limit the total amount of consumed fat.

What does the MD consist of?

The Mediterranean-style diet is a diet rich in fruits and vegetables, white flour and whole wheat breads, different forms of cereals, potatoes and various beans, nuts and seeds. The daily intake of dairy products is usually in the form of cheese or yoghurt. The most common dessert is any kind of fruit, while sweets are eaten only a few times a week, and sugar in many cases is replaced by honey. It is also characterized by the monounsaturated olive oil, which is the main fat source, with dairy products, fish, and poultry consumed in moderate amounts, eggs, and wine consumption in moderation (one or two glasses of wine per day).

The total lipid intake is relatively high, around or in excess of 40% of the total daily energy intake in Greece or around 30% of the total daily energy intake in Italy. The ratio of monounsaturated to saturated fats is much higher than in other parts of the world, including northern Europe and North America. The dietary pattern of MD could be described as having the following components:

It is also characterized by moderate consumption of wine (1–2 wineglasses/day), mainly with the meals, and a high monounsaturated-to-saturated fat ratio (>2). Additionally, although the intake of milk is moderate, the consumption of cheese and yogurt is relatively high. Feta cheese is regularly added to salads and accompanies vegetable stews.

MD includes a high fish consumption, which has long been recognized as important in the prevention of Coronary Artery Disease (CAD). The protective effects are most likely related to the cardiovascular benefits of Omega-3 fatty acids, especially docosahexaenoic acid and eicosapentaenoic acid, from types of fish such as sardines and mackerel that are consumed in this area. Omega-3 fatty acids are under investigation in recent years, through several studies, that have demonstrated their role in lowering triglycerides, their anti-inflammatory effect and the improvement of certain parameters of autonomic function, including heart rate variability.

The role of olive oil

The main source of fat in the MD is olive oil, which is mostly in the form of monounsaturated fat (oleic acid). It provides an excellent and delicious flavouring for cooking or salads, being a healthy alternative to butter or margarine. It is known that diets enriched with monounsaturated fat reduce total cholesterol and LDL-C levels to the same degree as low-fat, high-carbohydrate diets, such as the AHA Step I and Step II diets. However, the olive oil- enriched MD seems to have a better effect on triglyceride and HDL-C levels. Olive oil is also a good source of flavonoids, which are polyphenolic antioxidants that inhibit LDL-C oxidation.

Nuts as a fat source

Nuts provide many nutrients such as protein, carbohydrate and fat (without cholesterol), fibre, vitamin E, folic acid, potassium, and magnesium. The US Department of Agriculture’s food pyramid lists nuts in the same category as red meat, eggs, and dairy products because of the high fat content. In contrast, the MD places the consumption of different nuts, with the suggestion of 3-4 servings per week, in the same category as olives and pulses, which are considered as healthy plant based foods. The most common nuts consumed in the Mediterranean area are almonds, walnuts, pecans, pistachios and hazelnuts which are actually low in saturated fat and high in monounsaturated fats and Omega-3 fatty acids. Several studies have shown that nuts can lower total cholesterol and LDL-C levels by about 10%, and for this reason they should be included as part of a healthy MD, avoiding of course heavily salted and honey-roasted varieties.

The cardio protective effect of alcohol is well known, through many different studies (e.g. The F r ami n g h a m Heart Study). It is suggested that men and women who consume light to moderate amounts of alcohol live longer than non-drinkers, while men who have more than two alcoholic drinks per day have a higher risk of death than non-drinkers. One drink is defined as 1.5 oz (43 ml) of distilled spirits (e.g., whisky, gin, and vodka), 5 oz (142 ml) of wine, or 12 oz (340 ml) of beer. All the above are part of the healthy MD, providing an extra health benefit to the people consuming this diet.

Trans-fatty acids are produced when vegetable oils undergo a hydrogenation process. They are a very harmful type of fat, as they tend to increase LDL-C levels to the same extent as saturated fat and also decrease HDL-C levels. The overall result is that the adverse effect of trans-fatty acids on the ratio of LDL-C to HDL-C is double the effect of saturated fat. The MD is considered to be very low in trans-fatty acids, as it emphasises the consumption of whole, natural foods, in combination with olive oil.

Diabetes is a disease with many complications, and with increased risk of atherosclerosis. Diet plays a crucial role in the treatment of diabetes and the dietetic recommendations have varied a lot according to the period (Table 1).

The dietetic recommendations today are not as strict as in the previous years. However, they emphasize important but easy lifestyle changes, education, reduced energy and fat (approximately 30% of total daily energy) intake, regular physical activity and if necessary long-term weight loss of 5–10% of the body weight. Low-carbohydrate diets, which were restricting the total carbohydrates to very low quantities per day, are not recommended any longer, by the latest recommendations in the treatment of diabetes, and more flexible dietetic regimes are now advised to diabetics. The typical diabetic diet is synonymous with a general healthy diet, which should always be combined with physical activity and behaviour modification, in order to control the blood glucose levels, but also the body weight.

The main difference between the diets is the consumption of foods which are sources of carbohydrates and high Glycemic Index (GI) foods, such as rice, potatoes and bread. Thus, in the MD these foods are suggested to be consumed in large amounts (they are located at the bottom of the pyramid), and are considered to be the basis of the diet. On the other hand, in the diabetic diet it is suggested that these foods are consumed every day, in all the meals, in order to provide the necessary energy from carbohydrates, but in such amounts and quality that will not affect the glucose control negatively. For example, in the typical MD bread plays a very important role. People from the Mediterranean area consume bread or pita bread a lot, either with meals or separately as a snack, combined with cheese, honey, jam, olives. However, consumption of bread (especially white) which has high GI may affect blood glucose levels in a person with diabetes. The same applies to rice and potatoes, cooked as a main meal, and less with pasta dishes, which are very popular in the MD.

For the management of hypertension, there are general guidelines including certain dietary factors, such as a low salt intake (salt is probably the principal dietary component involved in increase in arterial blood pressure), a low saturated fat, plant-based Dietary Approaches to Stop Hypertension (DASH) diet and moderate alcohol consumption. Furthermore, the guidelines include recommendations for weight regulation or reduction and increased physical activity. Several studies have shown that MD, which is a low fat diet, with low salt consumption, can be associated with a reduction in total and cardiovascular mortality. This is due mainly to the use of olive oil (monounsaturated fatty acids) and the replacement of saturated with monounsaturated lipids.

A Mediterranean-style diet seems effective in reducing the prevalence of the metabolic syndrome and its associated cardiovascular risk. The relationship between MD and metabolic syndrome has been investigated in several studies. Several aspects of this dietary pattern have shown a beneficial effect on the development of the metabolic syndrome or its components. Particularly, fish and Omega – 3 fatty acids intake, moderate intake of alcohol, and consumption of olive oil, vegetables, and fruit, which are essential components of the MD, have been associated with a lower risk of cardiovascular disease. MD is related to improvements in the blood pressure and lipid profile (especially LDL cholesterol and triglycerides), decreased risk of thrombosis (i.e. fibrinogen levels), and improvement in endothelial function and insulin resistance, and reduction in plasma homocysteine concentrations Another common element of MD is the high content of antioxidants, providing an extra explanation for all the above benefits. The phenol-rich olive oil, the polyphenols from red wine, the high intake of β-carotene and vitamin C from vegetables, fresh fruits and cereals, and the flavonoids found in the wild edible greens frequently eaten in the form of salads and pies in the MD, are the most common protective elements.