‘No consistent standards’ in hospital food 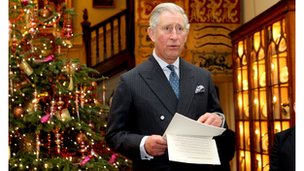 The Prince of Wales has campaigned for better hospital food for seven years
Continue reading the main story
Related Stories
More than one in 10 patients rates hospital food as poor, according to the latest official survey of more than 60,000 NHS patients in England.
Tracey Hurst still gets distraught about what her father, Eddie Barradell, was served in Royal Lancaster Infirmary earlier this year.
He’s 85 and has vascular dementia.
Tracey said: “I used to leave crying virtually every day. Even now, I feel very emotional about the way he was treated.
“I used to visit just after lunch. He’d be really angry but he couldn’t verbalise what was making him feel like that.
“When I saw what he was eating, it was just slop – something that I’d imagine you’d have in a Victorian workhouse.
“He was looking forward to mealtimes to break up each day, but it was horrifying for him.”
Tracey and her husband Stuart paid for food from the hospital restaurant, and mashed it up for Mr Barradell. He is now at home and doing well.
A hospital spokesman said: “We are very sorry that Mr Barradell was unhappy with the standard of food at Royal Lancaster Infirmary. Eddie Barradell was unhappy with his hospital food
“We endeavour to provide all our patients with a high quality, nutritious diet as this is a very important element of their recovery.
“While we recognise that there are occasions when patients are not happy with their diet, we believe that overall the standard of the food at Royal Lancaster Infirmary is of a high quality.”
The hospital showed BBC News copies of unsolicited letters from patients who were very happy with what they had eaten.
The drive to improve patients’ food has nothing less than a royal backer.
The Prince of Wales has campaigned on this subject, alongside the Soil Association, for seven years.
He recently held a reception at Clarence House to congratulate 14 hospitals which have signed up to standards like eliminating hydrogenated fats from their food.

Prince Charles wants many more hospitals to commit to quality.
In a speech to his guests he said: “It is surely self-evident that the food hospital patients are given should be prepared in a way that helps, rather than hinders, the process of recovery.
“A well-executed bangers and mash, for instance, will probably do more for a patient in hospital than a fancy signature dish with terrible ingredients and too much fat.
“I can only hope that in the coming years we will be able to persuade many more hospitals – and I’m afraid there are rather a lot still on the list – to match your remarkable achievements.”
The Hospital Caterers Association (HCA) says procurement legislation requiring managers to select the lowest bidder can constrain the provision of good food.
And many hospitals built under the private finance initiative do not have kitchen facilities which allow cooking from scratch.
The HCA’s Janice Gillan, who works for NHS Ayrshire and Arran, said: “One example is Edinburgh Royal Infirmary. It has 900 beds and has been open for about 10 years.
“It’s quite shocking that a hospital of that size was always intended to be built without a kitchen.
“One of my colleagues lost his fruit and veg supplier because someone else offered it for £3,000 a year less.
“He was forced to take the cheaper one, knowing full well there could easily be problems with it.”

The head of the Royal College of Nursing, Dr Peter Carter, finds it incredible that some catering managers fail to visit wards to find out what patients think.
Speaking at the reception at Clarence House, Dr Carter said: “I said to His Royal Highness – and he agreed – that I felt that hospital food should be on the agenda of trust boards. 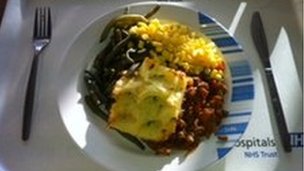 Nottingham City Hospital produces good food cheaply
“The regulator, the Care Quality Commission, should ask to see evidence that each board has discussed the nutrition and catering arrangements for its patients.
“Nurses tend to be on the receiving end of patients’ frustration when the food is poor or uninspiring.”
The kitchens at Nottingham City Hospital are 105 years old – but they show what can be achieved when there’s a determination to cook with wholesome, seasonal ingredients and, wherever possible, local suppliers.
Around 8,000 meals are prepared there every day, using industrial-scale 150-litre boiling kettles.
Nottingham’s head of catering, John Hughes, said: “There’s a myth in the industry that it’s extremely hard and expensive to run things in a traditional way, and that the skills aren’t there.
“But it’s actually cheaper. These myths are propagated by people who have a vested interest in you not doing the catering yourself.
“I think the NHS could save £200m a year at the low end if every hospital did this.”

He is proud of the sandwiches for patients, which cost around 60p each to make. These snacks help fill the gaps between meals for patients.
John added: “It’s thought that 40% of patients who arrive in acute hospitals are malnourished.
“We’re not going to change their world in four days – but we can try to get as many calories into them as we can.”
Nottingham shows good meals can be produced cost-effectively. So why is this not happening everywhere?
The health minister, Simon Burns, said: “Many hospitals have excellent food and the whole NHS should be learning from the best.
“There is a wealth of guidance and best practice information available to help hospitals provide tasty food.
“Cost is no excuse – an investigation by the Audit Commission found no relationship between the amount of money spent on food and its quality.